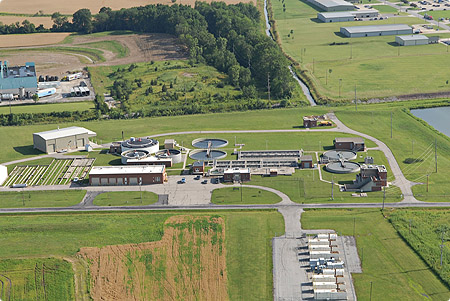 See our complete listing of sewer use charges and regulations. This link provides the most up-to-date answers to your sewer rate and use requirement questions.

Notice: No adjustment made for the filling of swimming pools.

What is Mercury? Mercury is one of the group of elements known as heavy metals. Many of these (including lead, cadmium, and selenium) are toxic to living things. Mercury too can kill living things, from bacteria to human beings. In particular, it can be converted into an organic form, methylmercury, which is especially toxic.

Mercury is found naturally in the environment in several forms. In its elemental form, mercury is a shiny, silver-white, liquid metal. Mercury can evaporate to form colorless, odorless mercury vapors and it can be combined with other elements to form inorganic compounds. Mercury can also combine with organic material to form organic compounds such as methylmercury (MeHg), which is produced primarily by bacteria. It is in this form that mercury poses the greatest concern for environmental exposure.

Mercury is one of the group of elements known as heavy metals. Many of these (including lead, cadmium, and selenium) are toxic to living things. Mercury too can kill living things, from bacteria to human beings. In particular, it can be converted into an organic form, methylmercury, which is especially toxic.

What Devices Contain Mercury? The following mercury-containing devices are found in many or most buildings, and should always be removed prior to demolition. Doing so will generally be the responsibility of the demolition contractor:

These devices are often found in industrial and commercial settings, and sometimes in households.

These devices should be removed prior to demolition, although in many cases it may not be the demolition contractor’s responsibility to do so. For instance, gas company personnel should remove mercury gas flow regulators, and municipal programs or scrap dealers should deal with mercury-containing appliances. In some cases, such as mercury-containing rubber floors or mercury in pipes, removal by a contractor with specialized experience may be necessary. Mercury will need to be poured out of any device that cannot be moved or shipped without spilling mercury, as may be the case with some manometers and flow meters. Only contractors who are experienced with mercury and have adequate worker protections should pour mercury out of these devices.

Should any of these devices be encountered, the building owner should be notified to arrange for proper handling and removal.

Common Mercury Contributors: Automobile Service: Mercury is present in dirt and oil. In some instances, automobile service industries discharge mercury and contribute lead and other metals to the wastewater.

Painting and Paint Stripping: Mercury has been banned from latex paint since 1990. An average mercury concentration of 250 ppb was found in latex paint analyzed by the South East Pollution Control Plant in San Francisco, Cal. Old latex paint from their house-hold hazardous waste collection facility had an average mercury concentration of 125,000 ppb. Sources of mercury in old paint in some businesses may need to be addressed.

Scrap Dealers: Vehicles, appliances and other devices (light fixtures, gauges) contain mercury components. Mercury components can be a significant contribution depending on how the scrap dealer processes material. Most processes do not involve the use of water

Landfill Leachate: Leachate characteristics vary widely depending on the type of landfill and the waste in it.

Pollution Control Devices: Facilities that use wet scrubbers may contribute large amounts of mercury if the scrubber water is not pretreated before discharge to the sewer.

Unique Mercury Contributors: Differences in local economies create mercury contributors unique to each community. The following are a few examples:

Industrial Laundries: Research from the Detroit Water and Sewerage District suggests that the contribution from industrial laundries can be significant. The potential source of mercury is chemicals used in the cleaning process, such as caustic soda or bleach, or simply the dirt, grease and oil in clothing. Some studies indicate that mercury may come from dyes or preservatives in clothing, particularly imported clothing.

Laboratories: Mercury discharges are due to use of mercury-containing equipment and reagents. Reagent use varies with the type of lab.

Dentists: Dental contributions are due to mercury-containing amalgam. Some of this mercury may be transformed into a bioavailable form during wastewater treatment. Most of it concentrates in wastewater sludge, which is land applied or incinerated. Studies have shown an average mercury contribution to wastewater from 0.1 to 0.3 grams/dentist/day.

Sewer Cleaning Practices: Mercury collects in the sediments in sewer lines because it is much heavier than water. Sewer cleaning practices send a significant amount of mercury to a plant through flushing of the lines. Alternative cleaning methods, such as removing sediment with a bucket, vacuuming sewer lines, should be considered for use below facilities with current or historic uses of mercury.

Septic Haulers: Samples of septic hauler discharge recorded an average mercury concentration of 62 ppb in a recent study. The total volume of septage is low compared to other sources. Calculate a mass-loading estimate to assess the importance of the contribution to your facility. Septage was also found to be high in lead.

Residential Wastewater: We need to calculate a mass-loading estimate for the known residential flow.

Veterinary Clinics: Sources include mercury-containing reagents and measuring devices. Thermometer breakage may be common when working with dogs and cats.

Printing Industry: Mercury is discharged to sewers from inks or special paper coatings.

Pottery and Arts: Mercury is discharged to sewers from pigments in art materials. Concentrations of up to 0.31 ppb in the discharge of arts centers have been recorded. Testing of individual ceramic glazes found concentrations up to 41 ppb.

How can Mercury Affect my Health? Exposure to high levels of elemental mercury vapor can result in nervous system damage including tremors, and mood and personality alterations. Exposure to relatively high levels of inorganic mercury salts can cause kidney damage. Adult exposure to relatively high levels of methylmercury through fish consumption can result in numbness or tingling in the extremities, sensory losses and loss of coordination. Exposure of the developing fetus through maternal intake of contaminated fish can result in neurologic developmental abnormalities in cognitive and motor functions. Whether or not any of these symptoms actually occur and the nature and severity of the symptoms, depends on the amount of exposure.

Exposure to Mercury In its various forms (pure element, inorganic compounds, organic compounds), mercury is found in air, water, soil and fauna and flora. All of these environmental media may be involved in human exposure to elemental mercury and mercury-containing compounds.

Organic mercury compounds, like methylmercury, can enter the body readily through all three routes; lungs, skin and stomach.

Mercury affects the human brain, spinal cord, kidneys, lungs, and liver. Symptoms of short term to high levels of mercury include nausea, shortness of breath, fever, muscle aches, sore gums, and an elevated white blood cell count. Symptoms of long-term exposure to elevated levels of mercury include tingling sensations in the fingers and toes, a numb sensation around the mouth, and tremors. Long-term exposure to high levels of mercury can result in symptoms that get progressively worse and lead to personality changes, tunnel vision, stupor and coma. Women who expect to become pregnant should not eat mercury-contaminated fish. Mercury affects fetal development, preventing the brain and nervous system from developing normally. Affected children show lowered intelligence, impaired hearing and poor coordination.

Mercury is both a precious metal and a neurotoxin. The “mad hatters” of the 19th century suffered from mercury poisoning – so did the hat makers in Danbury, Connecticut, who called their disease the Danbury Shakes. In short, mercury can be harmful to fish, waterfowl, wildlife, and humans.

The mercury felting process prevalent in the nineteenth century and many other industrial uses of mercury have been discontinued, and today most people are not exposed to dangerously high levels of mercury in their job settings. However, mercury may still be an occupational hazard for people working in medical care facilities.

In Case of Exposure: Humans are exposed to mercury primarily through ingestion of fish that contain methylmercury. Inhalation of mercury vapors is a potential occupational risk in industries that process or use mercury. Skin contact with materials containing organic mercury and elemental mercury may also result in mercury exposure.

If there is the possibility of skin exposure, emergency shower facilities should be provided. Post hazard and warning information in the work area. In addition, as part of an ongoing education and training effort, communicate all information on the health and safety hazards of mercury to potentially exposed workers.

Environmental Protection Agency (EPA): EPA estimates that for an adult of average weight, exposure to 0.021 milligrams (mg) of inorganic or organic mercury per day in food or water will probably not result in any harm to health.

Occupational Safety and Health Administration (OSHA): The legal airborne permissible exposure limit (PEL) is 0.1-mg/cubic meter, not to be exceeded at any time.

The above exposure limits are for air levels only. When skin contact also occurs, a worker may be overexposed, even though air levels are less than the limits listed above.

Suppose, for example, a thermometer breaks or a mercury-containing solvent spills. If mercury vapor is inhaled, as much as 80 percent of the inhaled mercury may be absorbed into the bloodstream.

The biological half-life of mercury is 60 days. Thus, even though exposure is reduced, the body burden will remain for at least a few months.

The effects of mercury poisoning can be classified as: acute, chronic or other. The degree of risk varies depending on how much mercury a person is exposed to and how often, and on stage of life. The work environment can be designed to minimize workers’ exposure, however, not all of the mercury used in a facility remains there. For instance, the elimination of the use of mercury in medical settings has been recommended. This recommendation is not because of the potential danger of exposure to mercury in medical facilities, but to help keep mercury out of the environment. When mercury escapes into the environment, it may undergo a change into methylmercury and enter into the food chain. Methylmercury is a form of mercury that is more toxic than elemental (liquid) mercury and is more easily absorbed that elemental mercury. As a bioaccumulative, mercury, may collect in the flesh of fish where it is transferred to humans by eating the fish. Mercury-contaminated fish is thought to be a significant source of mercury exposure to humans.

Mercury and the Environment: What happens to mercury when it enters the environment? Mercury is persistent, mobile and bioaccumulative in the environment, meaning it is retained in organisms. Most of the mercury found in the environment is inorganic mercury that can enter the air from several sources. Examples of sources include emissions of coal-fired power plants, burning municipal and medical waste, and natural processes such as erosion of ores and volcanic activity. Methylmercury is quickly taken up into higher organisms through the food chain and is retained in their bodies. It reaches the highest levels in large predatory fish and in birds and mammals that consume fish. Levels of methylmercury in fish are typically 100,000 times those in the water in which they swim.

Mercury is also a naturally occurring mineral that can be found throughout the environment. Mercury forms can be found as the elemental metal or in a wide variety of organic and inorganic compounds.

There is a constant biogeochemical cycle of mercury. This cycle includes:

• Release of elemental mercury as a gas from the rocks and waters (degassing)
• Long-range transport of the gases in the atmosphere
• Wet and dry deposition upon land and surface water
• Absorption onto sediment particles; bioaccumulation in terrestrial and aquatic food chains