Mayor Carrie Schlade began her second term January 1, 2022, and is the City of Bryan’s first female mayor. She has a background in paralegal work, community volunteering and managing local political campaigns. Prior to being elected mayor, Carrie served on Bryan City Council for two years.

She is a graduate of Ayersville High School and Northwest State Community College. Her past memberships include Bryan City Schools PTO, Bryan Planning and Zoning Commission, Bryan Community Reinvestment Area Board and Bryan Civic League. She is a past president of the Bryan Soccer Association and the current secretary for the Williams County Republican Central Committee. Carrie is also a member of the Junior Achievement of Williams County Board. Mayor Schlade is currently the Chairperson for Williams County Economic Development Corporation (WEDCO). She is currently the 1st Vice President of Ohio Municipal League’s Board of Trustees. Mayor Schlade represents the City of Bryan/Bryan Municipal Utilities as an Executive Committee Member of the OMEA Board of Directors.

Carrie is married to Dr. Joshua Schlade and they have 3 children, Lillian, Elijah and Emma. The Schlade’s are members of Trinity Lutheran Church.

Residents are invited to stay up to date with happenings in the office and the community through the mayor’s official Facebook page. 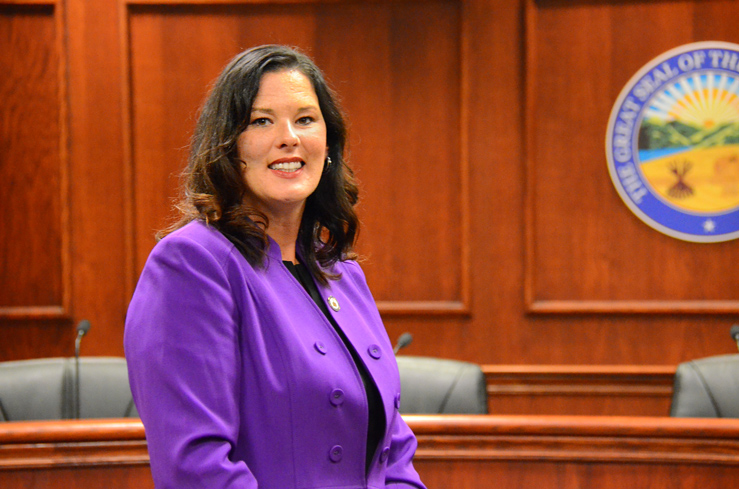 The mayor’s office is located in the Don North Municipal Building at 1399 East High Street in Bryan and is open 8:30 a.m.-4:30 p.m. Monday through Friday.

Garage Sale: Garage sales are allowed in the City of Bryan twice a year for a period of three days each time. Permits are $1.00 and may be obtained in our office, at Parks & Recreation Department or from the Police Department. (See Codified Ordinance of the City of Bryan 793.03)

Solicitor: Door to door sales in the City of Bryan requires a permit, which can be obtained through our office. The permit requires a police background check and approval by the mayor. Soliciting (door to door sales) is allowed only during daylight hours, through the weekdays. Permits are $50 per month for each person going door to door. (See Codified Ordinance of the City of Bryan 753.02) Solicitor Permit

Transient Business: Temporary or transient business in the City of Bryan that sell or buy goods are required to obtain a permit from our office. The cost of the permit is $25 per day. This permit also requires a police background check and approval by the mayor. (See Codified Ordinance of the City of Bryan 773.02)

Amusement Device: Mechanical amusement devices in any store, restaurant, tavern or club must obtain a license from our office. A charge to the business is $10 per device and the license is renewable annually. (See Codified Ordinance of the City of Bryan 733.02)

Food Truck Permit:
Food truck permits are required which can be obtained through our office. The permit requires a police background check and approval by the Mayor. Permits are $50 per year and only certain city parking lots may be utilized for such business. (See Codified Ordinance of the City of Bryan 773.01) Click here to downlaod the application.