Amphitheater coordinator: ‘Everything is on the table’ for events 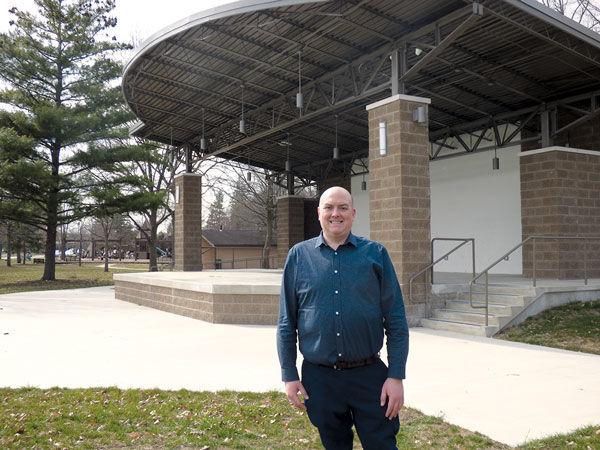 Jeffrey Tonjes, Fountain City Amphitheater coordinator, said “everything is on the table” for events at the amphitheater, which are currently expected to start in June. He’s working on concerts, comedians, movie nights and more.
Photo by Lucas Bechtol

Plans are in the works to start programming at the Fountain City Amphitheater this summer.

The amphitheater — built at Moore Park with funds raised through the Project 2020 fund — was dedicated in October and musician Matt Hammitt performed the first concert a few days later.

Now, the city has hired Jeffrey Tonjes as the Fountain City Amphitheater coordinator and is working on scheduling and running events.

“Being that it’s a new thing for Bryan, everything is on the table, anything that would be entertaining or beneficial for Bryan and the community,” he said.

His guidance comes mostly from the Bryan Parks and Recreation Department, though Tonjes said he also spoke with Mayor Carrie Schlade.

He’s also reached out to the community through Facebook to get an idea of what people would be interested in seeing there.

Yoga, Zumba and other fitness programs are also on the table as possibilities. Kids programs and even school concerts have also been discussed.

The goal is simply to have programs to make the community “better and enjoyable,” Tonjes said.

Current plans are to have programs starting in June with the announcement coming in early May.

“Everyone is kind of hesitant because of COVID, so it’s dragging the process out a little bit,” Tonjes said.

Then, they would have programing throughout the summer, possibly into October. A winter concert or program is also a possibility.

Tonjes started the part-time position about two weeks ago.

“I’ve been planning events for 15 years,” he said. “I’m from the Napoleon area, I’ve planned events there and also in the Chicagoland area for 15-plus years. That ranged from theater to concerts to general events.”

So far, Tonjes’ job has been a lot of planning, usage, guidelines and working on contracts.

Most of the events will be free to the public through corporate sponsorships and people will be allowed to rent out the amphitheater. Those interested in renting it can contact Tonjes at: fcamp@cityofbryan.com.

“I think it’s going to be a great experience for the Bryan community and just something to add to the community,” Tonjes said.

Also in June, the interactive fountains are expected to be installed.

Originally from Napoleon, Tonjes said he traveled for a living for around 15 years, stopping because of the pandemic.

“I have a degree in theater, so I’ve been in the event or production phase for longer than 15 years,” Tonjes said. “I’ve always enjoyed creating events for the public to come and enjoy. So, when I saw this position I thought it wasn’t far from my house — about 25 minutes — and I was like, ‘Let’s try it out.’”

This first year, the coordinator position is part-time, but most of the events will be on weekends or nights, so he can still do both his full-time and part-time jobs. There is the possibility his position will become full-time in the future.

Tonjes lives in Napoleon with his dogs and cats and works full-time at the Henry County Hospital as a registration clerk for the emergency room.